One of the Daintree’s celebrity crocs has been lucky enough to cough up a crab pot after it was lodged in the animal's mouth for more than a week.

Solar Whisper tour operator David White said he had been keeping a close eye on Nate, a four-metre male crocodile, after it was found with two ropes hanging out its jaw.

A Department of Environment and Science (DES) spokesperson told Tropic Now crocodiles that become tangled in crab pots are highly likely to drown.

While Mr White alerted wildlife authorities when he first saw the animal struggling with the plastic debris a week ago, he was told Nate would probably cough it out.

“We were really worried about him … it was very upsetting for me,” he said.

“If people could just imagine it was a turtle or cassowary or dolphin they have been watching for decades, then they could feel the helplessness.

“His head is all banged up on the side the ropes were hanging out, as he was probably smashing around, trying to get it out.”

Mr White, who’d been working on the Daintree River for 24 years, says this isn’t the first time he’s seen a crocodile swallow a crab pot.

“I’ve seen it happen a lot, and often find crab pots with teeth marks in them."

In February, a 4.5-metre crocodile drowned in Port Douglas Marina after getting tangled in crab pots.

Earlier this year, Mr White also monitored a female crocodile in the Daintree River which was struggling to swim with a rubber tube stuck in its mouth.

“Lizzie was trying to shake the rubber out for hours and hours – I presume all night as I was there till late and she was still doing it the next morning.

“People ask ‘how could she of thought it was a snake?’ In the same manner that turtles mistake plastic bags for jellyfish.

“They aren’t programmed for our pollution.”

Fortunately, Mr White was able to collect the rubber tube after it fell out of the 2.7-metre crocodile.

The DES says crab pots left in waterways pose a serious risk of entanglement and drowning for crocodiles and other marine animals.

"People need to check their crab pots regularly, as they can endanger not only crocodiles but turtles and other marine life,” a DES spokesperson said.

“Virtually every crocodile that gets entangled in crab pots or nets drowns.

“Wildlife officers would assess each entanglement on an individual basis, and would only attempt to disentangle the animal if it could be done safely.

“People who entangle crocodiles of any size in fishing lines or nets, or discover an entangled crocodile, are urged to cut the line as short as possible where that can be done safely, and to contact DES wildlife officers.

“People are reminded not to handle estuarine crocodiles of any size, as crocodiles can inflict serious injuries when handled.”

They chew on
them like a toy.
David White
Solar Whisper 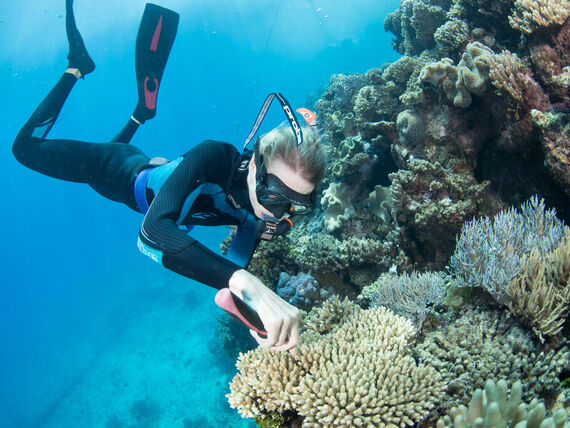 700 jabs per day will be administered at a new COVID-19 vaccination centre at the Cairns South Health Facility in Edmonton.
MORE