Testing of new technology onboard a drone in Far North Queensland has proven it can spot crocs more accurately than humans.

The CrocSpotter artificial intelligence algorithm was taken for a spin on the Mowbray River this morning in a demonstration that was live streamed to the World of Drones Congress in Brisbane.

VIEW THE VIDEO BELOW

A joint project of The Ripper Group, the University of Technology, Sydney (UTS) and Amazon Web Services (AWS), the drone can distinguish between crocodiles and other objects such as logs. 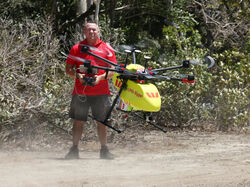 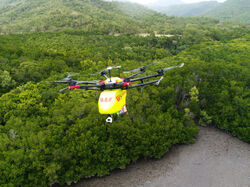 “The technology enables crocodiles to be detected in complex environments including murky and muddy waters in both wetlands and the open ocean,” said UTS researcher Dr Nabin Sharma.

“This is the first time that this sort of animal detection drone technology has been deployed via a high-quality video stream at ultra-low latency.

“The AI is producing a greater than 90% accuracy to detect crocodiles.”

In fact, the algorithm’s 93% accuracy rate is much higher than that of the human eye, rated at between 16% and 19%.

It’s similar technology The Ripper Group initiated for its Westpac-sponsored drones that spot sharks and swimmers in distress.

However, the company’s Chief Operations Officer, Ben Trollope, said spotting crocodiles is much harder because they live in murkier water and can go under for long periods.

"Crocs are designed to be an ambush predator, they sit on the bottom and creep up and attack something on the edge of the water," he said.

"Their skin colour is very similar to their surroundings as well so it's about marrying up these different aspects and teaching the AI.

"Having the ability to penetrate murky water, that’s a big thing for us so there are filters for water penetration and multi-spectra cameras to take away certain colour bands."

The algorithm operates by ‘washing’ the video and putting a flashing red box around a potential crocodile, which is seen on the pilot’s iPad.

One of the challenges has been to reduce lag as the video is sent to the cloud, processed and beamed back to the operator.

“The low latency video stream powered by AWS is critical to ensure information is quickly transmitted to pilots powering the drone,” he said.

“The cloud’s scalability has allowed The Ripper Group to innovate new ways to save lives and protect native crocodile wildlife.”

Queensland Surf Lifesaving is hoping to roll out the technology as part of the State Government's CrocWise program to prevent crocodile attacks.

It will also be used to develop a better understanding of crocodile populations.

Restored Jack Barnes Boardwalk in Cairns reopens to the public

The boardwalk has been restored as a result of a community campaign following its closure three years ago.
MORE

An increasing number of heatwaves have been responsible for more deaths and hospitalisations than any other natural hazard, including floods and cyclones.
MORE

Still Here, which was born from the hairy despair of Melbourne's lockdowns, will be performed at the Cairns Performing Arts Centre later this month.
MORE